Results and Achievements of IOM Slovakia in 2019

Results and Achievements of IOM Slovakia in 2019 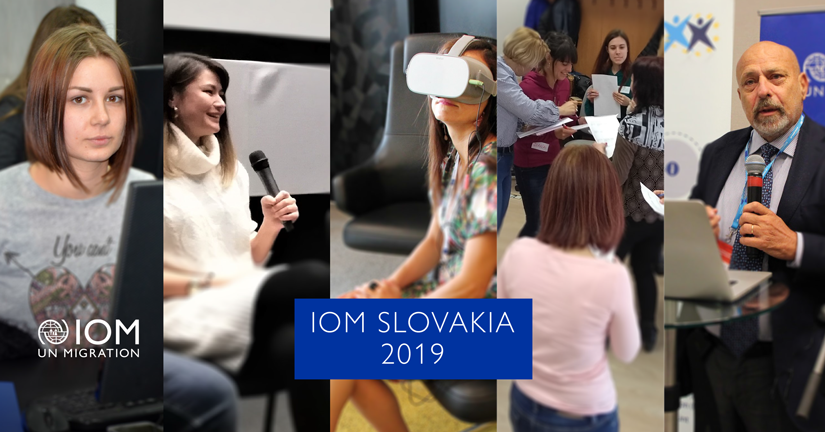 In 2019, the IOM Migration Information Centre provided 6,198 clients with 10,398 consultations about important areas of life in Slovakia. Another 108 foreigners benefited from the IOM assistance with their voluntary return to 24 countries of origin. IOM lecturers trained another 87 professionals in the field of human trafficking prevention.

In 2019, the IOM Migration Information Centre in Bratislava and Košice provided 10,398 personal, telephone or e-mail consultations on residence, family, employment, business, education or citizenship in the Slovak Republic.

A total of 6,191 beneficiaries used the MIC free services, mostly from Ukraine, the Russian Federation, Serbia, India, Iran and the USA.

The MIC website www.mic.iom.sk is a unique source of legislative and practical information for foreigners about important areas of life in Slovakia. Information is available in the Slovak, English and Russian language. In 2019, the MIC website recorded 325,706 visits.

In 2019, the services of the Visa Check web application were used by 4,270 beneficiaries from 147 countries. This MIC application offers information to foreigners from any country of the world who plan to come to Slovakia and who need to check whether they need visa in order to enter the country and what kind of residence permit is required if they want to study, work or do business in Slovakia.

The Centre also supports foreigners in their integration into the labour market in Slovakia. 627 beneficiaries received support with orientation in the labour market, with preparation of their CV and job interview, communication with employers, with job search or job referral. With the financial support of the MIC, another 47 beneficiaries completed retraining courses, which will increase their chances to get a job in the Slovak labour market.

In 2019, the MIC held three One-Stop Shop Counselling Days which took place at the Foreign Police Department in Bratislava. More than 82 visitors from 30 countries benefited from these one-stop counselling sessions with the direct involvement of representatives of state and public institutions such as the Foreign Police Department, Labour Office, Trade Licencing Office and MIC consultants.

In 2019, the Centre also provided counselling to unaccompanied migrant children (UMC) in the Centre for Children and Families “PALM” in Medzilaborce. The MIC services included Slovak language courses and provision of individual legal advice for UMC.

In 2019, the MIC continued to organise free Open Slovak Language Courses for Foreigners, which were attended by a total of 2,417 people in Bratislava, Košice, Sereď and Nové Zámky. The courses of socio-cultural orientation helping foreigners to orientate in important areas of life in Slovakia were attended by 198 participants.

In 2019, the MIC updated the Welcome to Slovakia brochure. It is available in Slovak, English and Russian and it contains a basic overview of the residence and employment of third-country nationals, information about the education system, health care, social security and other important areas of life in Slovakia.

The MIC cooperates with 13 cultural mediators – representatives of associations and communities of foreigners in Slovakia. In 2019 the Centre together with mediators organized 16 Welcoming Slovakia information meetings for more than 447 participants. At the meetings, foreigners get practical and useful information about life in Slovakia.

In 2019, the MIC organized three more regional information workshops We Are Also At Home Here. Two were held in March in Prešov and Martin, and one was held in December in Bratislava. Visitors of these workshops had a chance to view films, discuss with foreigners, view a photo exhibition or taste Asian gastronomic specialty in order to  learn more about life and culture of foreigners living in Slovakia.

In December 2019 in Bratislava, the MIC prepared another We Are Also At Home Here event for the public with a screening of the film The Stranger in Paradise, which was part of the 4th Global Migration Film Festival in Slovakia. The screening of this powerful story of hope and disappointment on journey to Europe was followed by a discussion with interesting guests from Nepal, Kazakhstan and Ukraine. 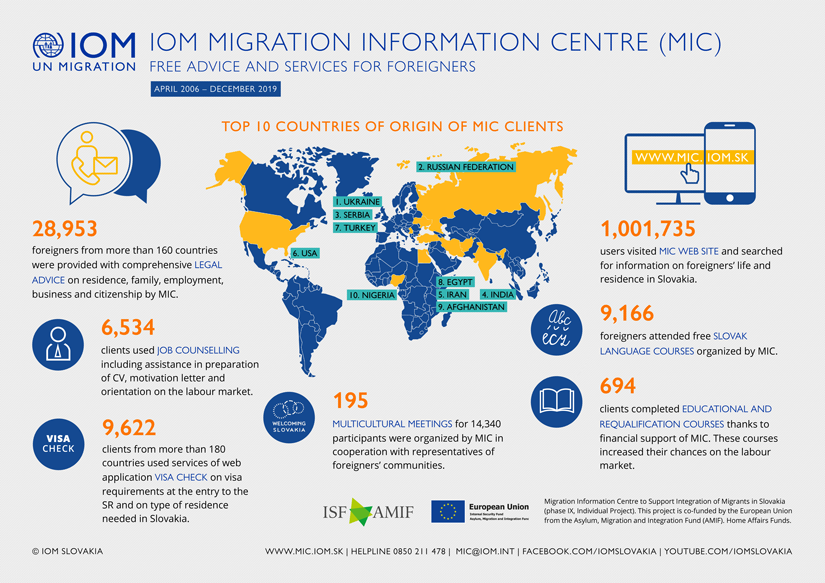 Migration Information Centre to Support Integration of Migrants in Slovakia (phase IX, Individual Project). This project is co-funded by the European Union from the Asylum, Migration and Integration Fund (AMIF). Home Affairs Funds.

In 2019 IOM assisted a total of 108 individuals with their voluntary return from Slovakia to 24 countries of origin. 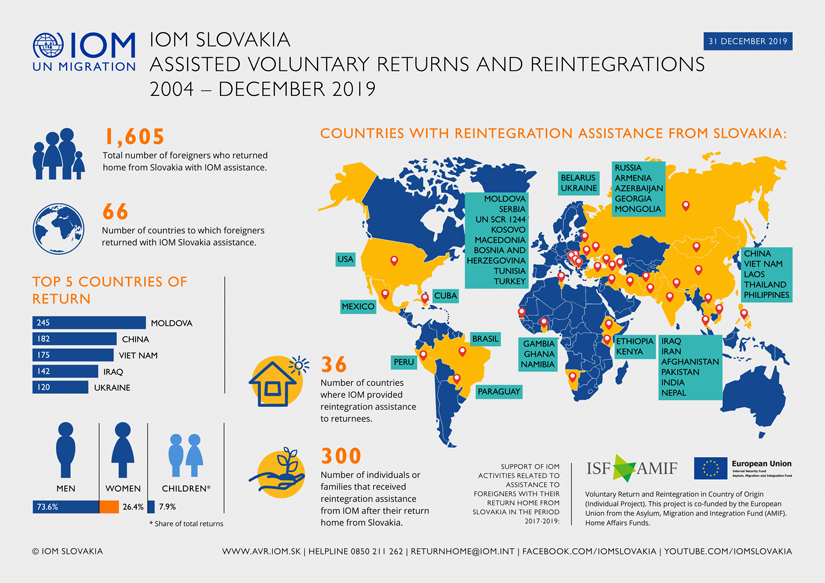 Voluntary Return and Reintegration in Country of Origin (Individual Project). The project is co-funded by the European Union from the Asylum, Migration and Integration Fund (AMIF). Home Affairs Funds.

IOM assisted one victim of human trafficking in returning to Slovakia. The victim was further referred to the Slovak Catholic Charity, which operates a reintegration assistance programme for victims of trafficking.

In March 2019, in Košice and Piešťany, IOM trained another 87 professional practicioners who are working with vulnerable groups of population.

As a result, trained professionals are able to teach both individuals and groups how to recognize the risks of human trafficking, how to avoid them and what to do in a crisis situation. This training programme enhanced the knowledge and skills of participants with new educational methods about trafficking in human beings and how to make learning interesting with interactive activities and employing the mobile application SAFE Travel & Work Abroad.

In 2019, IOM has released an updated Training Manual on Prevention of Trafficking in Human Beings. In addition, IOM extended the mobile application SAFE by two additional language versions. The application is thus available for free on the Google Play, on the App Store, and at www.safe.iom.sk in seven languages: Slovak, Czech, English, French, German, Hungarian and Polish..

In 2019, IOM‘s educational activities in the field of preventing human trafficking and publishing of an update of the Training Manual on Prevention of Trafficking in Human Beings within the project „Capacity Building of Experts Working With Vulnerable, Socially Disadvantaged Groups in the Field of prevetion of trafficking in human beings“ was financially supported by the Ministry of the Interior of the Slovak Republic, which acts as a coordinating body for comprehensive care provided to victims of trafficking.

In 2019, EMN was also working on other studies that are planned to be published as synthesis reports in 2020:

EMN continued to update in 2019 the terms within the EMN Asylum and Migration Glossary, which is available at European Commission’s website as well as free mobile application.

From January to December 2019 EMN organised seven expert meetings and events including the 7th EMN Educational Seminar on Migration.

Experts from 10 countries lectured during the seminar about the impacts and opportunities of international migration for more than 70 representatives from state and public administration.

The seminar agenda contained also two evening events for the public. The first one was screening of the documentary film The Good Postman about the election for mayor of an almost deserted Bulgarian village on the Turkish border. The second event was a play Home (Where is Yours?) by Nová Scéna Theatre, followed by a discussion with experts on how to talk about migration in an accurate and balanced way.

In 2019, EMN in Slovakia responded to 68 Ad-Hoc Queries and launched four Ad Hoc Queries to other Member States. Through the European EMN Ad-Hoc Queries system the EU Member States and Norway exchange information needed for the policy-making or drafting legislation and strategic documents in the field of migration and asylum.

EMN activities in Slovakia are funded by the European Union’s Asylum, Migration and Integration Fund and co-funded by the Ministry of Interior of the Slovak Republic.